It's been too long!

I know that I say this every time before I post a blog, but this time it's been a good while since I posted. I haven't updated all of you since July 27th! I'm sorry for this, there have been plenty of reasons why I haven't been blogging, but I won't go into them. They have got nothing to do with the charity work, it's all personal boring stuff!

I will warn you all now, I won't be posting into too much detail this time, it would simply take too long. You wouldn't be able to read it all in one go! I will keep it brief, and then once I started posting again each week, I can include more details.

I must admit, I am a little bit nervous to post after not writing for so long. I fear that I will miss important bits of information. But, I have a good few hours to do this, so I will make sure I cram the most interesting bits in!

Let me start from where I left off. Ah yes, I even had to check my last blog post to see what I had written about. We were just about to paint the walls for Mama Dora's house. Of course, by now, and I'm sure that all of you know, we have finished that house. Which means that The House That Zac Built officially finished their first project. Credit? It's a beautiful little home out in Duka Bovu. I visited Mama Dora a few weeks ago to see how she was getting on. It sits so well which the scenery. I know I have said it before but I would love to live somewhere like that, it's so peaceful. Mama Dora and her family are doing great, they love their new home. Mama Dora said to Adam that she knew she had always wanted her own place, but she never knew how nice it would feel to live in her own home, to have the freedom which she has. Mama Dora has also built a small little kitchen outside of the house, as it can get quite windy there, so she needs the shelter! However, there was once thing which annoyed me a little bit. When we were building her house, there were no other houses around, and from the windows there were beautiful views of the Tanzanian landscape. However, just a few weeks after the family moved in, one Mama decided to buy a plot of land right next to Mama Dora's. She has already started to build five rooms for rental there. Now out of one of the windows, all you can see are bricks! I don't understand it, there is so much land around, why couldn't she find a plot which didn't block the view? It's so frustrating. It's very common here in Tanzania, people copy each other a lot. 'Oh that Mama is living there now, there must be something good there, I'll go build a house right next to hers!' No - please find your own plot somewhere and leave Mama Dora and her family alone! Anyway, apart from that, they are great! They are living comfortably in one bedroom and living room, and are currently in the process of renting out the third room, so that they can easily sustain themselves! 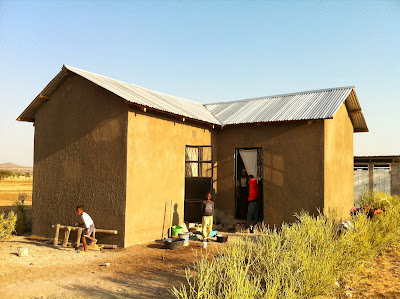 After Project Dora came Project Sanitation! Once we had finished Mama Dora's house, we had some money left over so we decided to start a side project until we had raised enough to build another house. The idea was to provide three families, living with poor sanitation, three new good toilets. Also, to provide them with personal hygiene information and toilet paper! Most of the families who are poor use old exercise books.....It didn't work exactly how we had planned as we only managed to have enough money to build one toilet. We do however, have the funds for another two now, but we are busy helping Alice with Mama Diana's house, so the toilets will have to wait.


We chose three families to build toilets for. Bibi Anna, (Bibi means grandmother in Swahili, but it's most commonly used to greet anybody who is much older than you) who lives in Unga Limited, not far from Mama Mary's house, Mama Godi, who lives in Monduli, and Bibi Mwanasifa who also lives in Monduli. We started with Mama Godi.


Mama Godi lives with around eight children. I can't remember all of their names, it's only Lightness and Goodluck that stick in my head. Lightness is the eldest daughter, and Goodluck is the eldest son. Lightness is 18, and Goodluck is 24. I had met Mama Godi a few times before whilst doing a food run for Project Rehema, so she knew me quite well. Their previous toilet was appalling, just a small shack made from bits of wood and some tar-pawling covering a small hole with a not very deep pit. Mama Godi was extremely happy when we told her we were going to be building her a new toilet, and she's even happier now it is finished! I forgot to mention, the whole time that we were building Mama Godi's toilet, we had a visiter! Charlie Car-Gomm, who is a friend of mine, expressed her will, a few months ago, to come and see our work, and to film a short documentary! I had a lovely time with Charlie, she was great to have around, wonderful to talk to, and I really enjoyed her filming things. I had filmed things in the past but never as well as she had, I don't have all of the fancy equipment either. Watching the footage back in the evenings, and seeing the translations was always nice. Charlie was around for just over a month. We visited each of the projects which we have done so far, but we spent most of the time at Mama Godi's filming the toilet being built. Charlie got really close to Mama Godi and the family, and she enjoyed spending her time there. Although, she did tend to fall asleep a lot of the time. I think it was partly due to the weather, but also altitude and dehydration would have factored. I tried the whole time, but I couldn't quite get her to drink as much water as you should be doing here, oh well.


There was one day where I thought I would try and be a bit artistic, but it didn't work out, infact, it was a complete fail . I tried to draw 'The House That Zac Built' in nice writing, into the wet plaster, on the side of the toilet. I'm too embarrassed to show it to you all, but here is what Charlie managed to do. I love it, I think we should do it on every house we build! 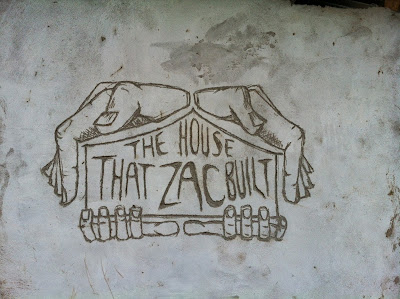 Unfortunately, after doing Mama Godi's toilet, we didn't have enough money to do anything else, so it all went on hold for a while. I will admit, I lost quite a bit of motivation over the time when we didn't have any work, and found myself getting pretty bored. I still had some problems going on, and also was still trying to make my car run properly. I was stressed. However, I feel better now, my energy levels are up again and I feel like writing my blog! It's a good sign.


The project which we are working on at the moment is a little different from Mama Dora's house. A while ago, I was contacted by a girl from the UK called Alice. I still to this day don't know how she found out about me, but she had heard that I had finished building a house for a lady in Tanzania. Alice, the same as me, used to volunteer with TVE. Whilst volunteering, she met a lady and her family who were living in extremely poor conditions, and decided that she wanted to build them a new house! Alice explained that she wanted to raise the money in the UK and then build the house around October time 2013. Alice visited Arusha in April, whilst Max and I were here, so we decided to meet up with her to talk about what she wanted to do. We met her one evening, and made plans to meet the following day so that we could go and see the site where she wanted to build. We all met Mama Diana, a lovely and very happy lady, who reminds me a lot of Mama Mary. Alice is to her what I am to Mama Mary, it's nice to see! I knew straight away the problems we were going to encounter with the project, which was mainly getting materials there, but I knew that we would be able to work it out!


I won't go too much into detail about the months after that. What I can say is that Alice is here, right now, and we have started to build the house for Mama Diana. Alice has done a great job of raising the funds in the UK. Being a charity now, she was able to use us on JustGiving, which I think makes people a bit more sure about donating. They know that they money is going to go to the right place! I think she raised around £4,500 in total. Which is plenty to get this house done, and an incredible achievement. Going back to what I said about materials, we have managed to sort it out, but it took a while. Firstly we found a good drop site for the materials, and we had all of the bricks dropped there. The only problem was that, the drop site, is situated about a five minute walk, up and down hills from where Mama lives. We used ten guys, for two days, to carry 1300 bricks to Mama's site. Bricks aren't too hard to carry, they are rectangle in shape and it's easy to get a couple laid on top of each other. Stones however, are a different story. Big, heavy, sharp edged awkward stones, are not easy to carry. We had to work out an easier way to get them to site, or it was going to cost Alice too much to pay people each day to carry them.  Luckily, I have Adam, a really smart local guy working with me, he helps me with so much. Without him, I wouldn't be able to work here and get the houses done. Adam found a different drop off site, which wasn't as easy to drop materials to, but it was easier to get them to Mama's. The land leading to Mama's house, was owned by an old lady nearby, who had no problem with us dropping the materials there, and luckily, no problem with using a wheelbarrow across her land to move them close to Mama's house either. We were pretty lucky. So lucky, that all of the stones for the foundations were delivered and moved to site in one day, we had predicted six days. Adam saved Alice a lot of money, and he saved her a lot of time too!


I'll leave it at that for now, but I will keep you updated with how the project comes along! Sorry again that it's been so long since I posted.